Oh wow, seems like the Linux world is abuzz all of a sudden! Must be the change in seasons!

Here is a great new site to go check out, Lin Libertine.

The reason they developed this was because of the pesky restrictions on TTF from Microsoft, e.g. they are not open source.

Philipp H. Poll started the Linux Libertine Open Fonts project in September 2003 because of his dissatisfaction with the fonts shipped with GNU/Linux distributions. "In SUSE 9.x," he recalls, "you had to use a script to download the Microsoft core fonts if you wanted to have good TrueType fonts." To improve the situation, Poll chose to start with the basics with Linux Libertine, an alternative to Time Roman and Times New Roman, the most commonly used typefaces in computing, and to develop it using free software methodologies and tools under the GNU General Public License. 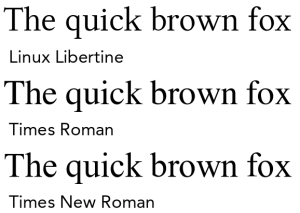