PCLinuxOS, new guy on the block!

I am a Gentoo fanboy. Full stop.
I doubt there is any other distro out there that can even come close to it, but I also love Linux and therefore am more than willing to test out new waters.

The test machine (as always) is the wife's PC. She is a bit slow taking up Linux and gives me the opportunity to use her PC as the guinea-pig. Also, she is the ideal candidate to give me an honest opinion of any distro which is needed because the more advanced Linux users tend to forget there are people who do not even know what a partition is.

I have seen the name pop up all the more frequently on various forums and decided to try it out. They say it is based on Mandriva, will have to see about that...

You download the version you require from any of the following mirrors.

I opted for the nvidia image on one of the mirrors (the 7676 one, seems like the most recent nvidia driver they support.) 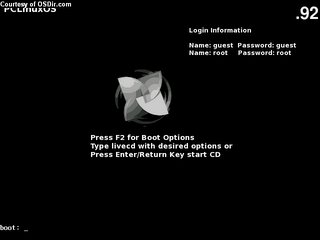 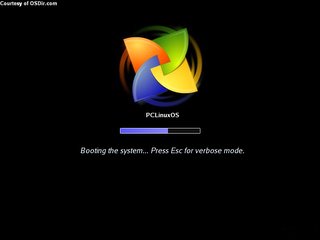 You boot into a LiveCD with X and nVidia support (yup, LiveCD with 3D DRI support) and just click one button on the desktop "Install PCLinuxOS".

The whole interface has a strong WindowsXP feel to it, something the die hard Linux gurus may snicker at, but I found it pleasing on the eye. The simplicity of the graphics just works. 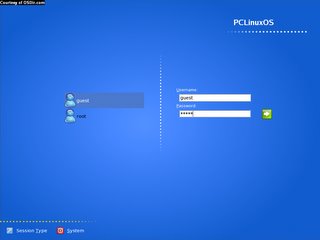 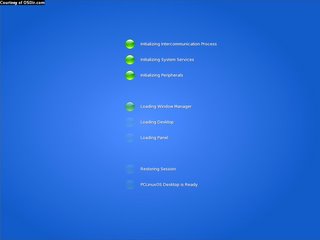 The installation is the easiest of all the distro's I have ever done.

In 6 easy steps the OS is installed to the hard drive of your choice, it couldn't be easier I say.
This really impressed me, the ease with what everything is done. Once installed you have, of course, your X server WITH 3D and DRI support already implemented. 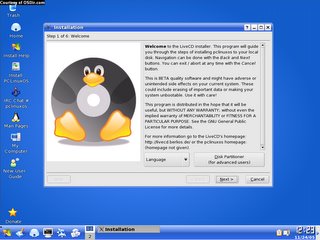 One downside is that the LiveCD desktop interface becomes almost useless once installation is in progress. One can understand this as the resources to load the desktop and then install it would be stretched to the max.

I would, however, highly recommend it for a beginner wanting to "check Linux out".

Now onto the nitty gritty....
Default boot (I only moved the icons a bit to make it more functional) 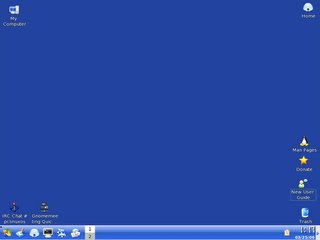 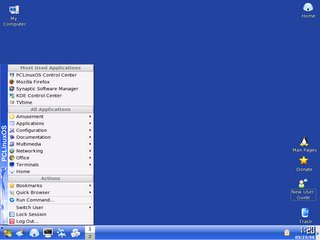 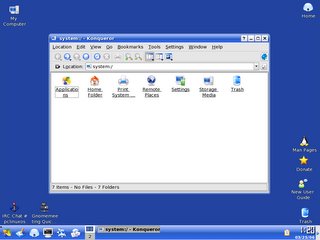 After installation you will find a fully functional KDE environment. Nothing fancy here, except all my hardware was detected and installed perfectly!
Sound, screen resolution, mouse wheel, network card, webcam, TV-tuner... and no interface was presented to ask input from my part at all. Not bad. One could, of course, change these settings if the need arise.

Applications that may be lacking "out-of-the-box" is a good office suite to complement KDE Office. (What would you expect from a one CD ISO image?)
Everything else needed is present, including the regulars like Firefox, Xchat, video players, The Gimp, K3B and a few p2p clients.

Also a plus is that MP3 and AVI (DivX/Xvid) support is included, not the case with many of the other offerings nowadays.

Looking a bit more closely one would notice that this version of KDE is indeed "patched" with a few nice little features! I was ecstatic when I notice the small things they gave attention to, like Yakuake and Krusader. A big plus in my book.

The software manager used is called "Synaptic Sofware Manger" and has the feel of Mandriva. Here we begin to see Mandriva sticking out it's head. So this distro is indeed based upon Mandriva! 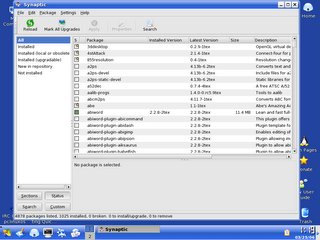 Syncing to get the latest package lists was effortless and also selecting and installing packages went smoothly. I do however feel the need to mention that dial-up users be very careful in selecting packages, it could become a huge and time consuming task to update everything.
On that note, one downfall is the lack of "security only" fixes and patches.

The "PCLinuxOS Control Center" is almost an exact copy of Mandriva control center. It has all the familiar options one would expect from a n00b friendly distro and plenty of wizards to even out the bumps. 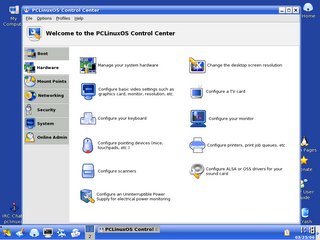 Looking at support one will find that all the more distros tend to use forums and wikis as a means to this end, and PCLinuxOS is no exception.
The forums is still young (as is the distro) but there is help available. I cannot comment on the forums all that much since I had no real problems to fix. You can also find the wiki here. Always a valuable resource for any distro.

There you have it, a distro for the beginner and not a bad download size to boot!

Thanks to osdir.com for borrowing the first few screenshot (hey, I'm not going to boot up a LiveCD again only for a few screenshots!)